I haven’t done a whole lot of international travel alone–without friends or clients–so when I had a unique opportunity to go on a paddling trip in addition to some site-seeing in Costa Rica, I said “hell yeah” and booked my flight.  I flew in to San Jose where I stayed at an adorable and apparently historic little hotel called Hotel Aranjuez. It is cute and serves an outstanding buffet breakfast with omelets made to order. I was impressed by how clean it is (and Costa Rica in general).

San Jose is a fun little city.  It’s artsy and full of museums (although heads up…Mondays almost all of them are closed). For me I really enjoy immersing in the culture and forcing myself to speak Spanish. In fact, I enjoy the taxi rides because I can almost always get a little Spanish lesson the entire time (with the exception of a surprisingly untalkative Uber driver heading back from Barva…but I digress). If you’re staying in San Jose, I highly recommend Calle 33 district for dinner. It’s a nice little street of restaurants that are tasty and adorable–works of art.  I chose “Saul”, a trendy spot that has amazing crepes, good service and decorated with awesome artwork. I got a kick out of their music–they played mellow “hip hop-ish” songs from the US (in English) but SUPER NASTY lyrics. I mean NASTY.  Here’s your ensalada with a side of “F@#$k that…well you get the idea. An interesting dichotomy that you wouldn’t hear eating in any upscale restaurant in Oregon–dance club in the city, yes. I had to laugh. Either way, a memorable experience.

My second full day in San Jose I left for the mountains out of Barva where I was excited to meet Arturo (one of Sam’s best friends and compadres for decades) who owns an adventure center there.  He’d graciously invited me to zipline at his Canopy Adventures which does a FABULOUS job. They are professional, safe and the area is gorgeous. After the ziplining, I had the opportunity to walk the trails with one of his crew, Alba.  She’s a lovely woman who doesn’t speak English but was great companionship (and guide) through the forest. The adventure took the better part of the day with travel, so to bed early to get up very early and connect with the paddling crew….

Let’s be honest, while I’m traveling “solo” it’s not like I was planning on hanging alone the whole time.  Instead, I arranged a solid 6 days with Brittany Parker, Natali Zolinger and their local outfitter partner Amazing Vacations.  Even better, Nadia Almuti joined us plus Alex and Jason who I hadn’t met before but are great. I met up with the crew in Sarapiqui where I got on my board for the first time in about two months.  I was rusty but quickly got my “river legs” back. The Sarapiqui is gorgeous and the rapids fun…class II’s. A great warm-up for what was to come. I’m amazed at the wildlife and how visible they are. Not a random sighting here and there but “monkey trees” as I call them, because it looks like the tree is growing monkeys…just as an example.  Within minutes of arriving we saw a mama Sloth with her baby.  Adorable!

Day two we decided to paddle a calm stretch on the Puerto Viejo river, to check out the wildlife rather than get our adrenaline rush.  Little did we know it would be a flatwater stretch “with class V trees”! There’d been a LOT of rain the previous day/night and trees in the jungle have very shallow roots.  We had trees falling IN THE RIVER as we were paddling. Sketchy and cool all at the same time. We saw a ton of wildlife and it was a great “rest day” for the next day on the Pacuare.

Let me pause here, and rave about Amazing Vacations. Walter who is co-owner and what I believe is the talent behind and success of AV came with us. He, Brittany and Natali really have this trip dialed–paddling the best, most appropriate stuff at the right time and lodging at the “awesomest” locations. Walter and his team, as well as Brittany and Natali, have taken such great care of me and my nuanced needs. I can’t say enough great things about these people. Biggest gratitude!!

Consistent with the name and motivation behind my blog, I love adventure sports…whitewater paddleboard in particular, but have a basic “fear” of whitewater.  Weird? Probably. But it’s something I continue to work on and challenge myself as a paddler…overcoming the fear to do what I enjoy. Brittany was my “security blanket” as we made our way down the 6-mile class II/III stretch of the Pacuare. I followed her lines explicitly sometimes getting so close that I was basically “lurking”. Haha…like mama and baby ducklings.  The debrief from Pacuare day one? I am proud of myself. I did well. I styled many sets of rapids I didn’t think I would, standing up through them and paddling how and when I needed to. I took several rapids on my knees. I also swam three times…one time hitting my hip on a rock giving myself a shiner and sore pelvis. AND, I walked a set of intimidating rapids and stand by that decision. It was over my pay grade, and while I maybe could have done it on my knees without falling in, it felt good to come off the river confident rather than a little scared.

Also, a little beta regarding equipment.  I paddled a newer Hala Atcha lent to me here.  I’ve always sworn by my older 9’6 with the piercing nose, but I’m a convert.  The blunter nose with more rocker served me well and probably how I managed to stand through many of the rapids I might not have, with my own board.  However, I also need to demo the Badfish River Shred because compadre Jason swore by it, and he’s been a Hala fan for years. I recommend trying both before you buy…for those who are in the market.  I’m upgrading for sure this season but the jury is still out on which brand it will be.

SO, we paddled the first part of the Pacuare to the Pacuare Outdoor Center where we stayed two nights with a layover “rest” day.  This place is one of the most beautiful lodges I’ve ever seen and I can’t imagine leaving after just one night. It’s a trek up a trail from river to cabins because it’s on a mountainside, but that location is what buys you such great views.  I felt like I’d walked into a movie (accidentally) as the leading lady, since I usually “dirtbag it” when traveling. This incredible private cabin was for me?! Yikes. It felt luxurious and wonderful.

Walter, Davis and Jonathon stoked out the whole group with outstanding appetizers, dinner and “jungle juice” made of locally created sugar cane alcohol.  The rest of the night was full of laughing, a drinking game called “Flip Cup” where I wore a “penis apron” and colander hat, and then just a little “black magic” as Walter called it. No worries though. There was plenty of dancing (table and otherwise). Oh yes, I might have done a table dance but before you get too excited it showcased the running man and a really bad version of “The Floss”. I redeemed myself with the Bachata.  Sort of. Davis is a great teacher and partner. A full moon and a night frog hike was the finishing touch on this perfect night.  Stay tuned for what comes next on Pacuare and past….

Thanks for listening.  See you out there on the frisky ripples!

Learning to sail with Captain Corey…longtime friend of Sam and SUP badass…. 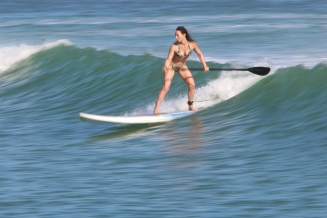